Arbitrage is a subject close to my heart, whilst my career in this industry started 17 years ago when I first encountered bookmaker bonuses, it very quickly graduated onto arbitrage. From that moment until today, the majority of my earnings have been from arbitrage.

It has allowed me to travel extensively, live in a number of overseas countries and without it my life would have been far different, and far less colourful. This will be the first of three articles on the subject, initially introducing the concept as well as basic calculations before moving on to using exchanges and finally some of the drawbacks as well as where you might look to find opportunities.

You'll see that I have also recorded a video on the subject so if that if you preferred form of media then watch on!

‘Arbitrage is the simultaneous placing of bets covering every outcome on a sports market in order to guarantee a profit, regardless of the result’.

The definition itself is a bit of a mouthful and so more easily illustrated with a numerical example.

Roger Federer is playing his great tennis rival Rafael Nadal. One bookmaker is offering odds of +105 (2.05) on Federer to beat Nadal, whilst a second bookmaker offers the identical odds on Nadal to beat Federer, also +105 (2.05).

You wager $100 on Federer at the first bookmaker, giving a return including stake of $205, should Federer win. You place the same bet on Nadal to win, therefore also offering a potential return of $205. Your total outlay is $200, consisting of 2 x $100 bets, whilst no matter who is victorious, you will receive back $205, a guaranteed profit of $5.

There are numerous types of arbitrage possible, the more complicated ones involving the mixing of different types of markets within the same event, but all have the same goal of covering every possible outcome within those markets. Here are the 2 most common involving bookmakers..

This is by far the most common opportunity to be found and involves betting at 2 traditional bookmakers on a market in which there are only 2 possible outcomes, either outcome A wins or outcome B wins.

The tennis match between Federer and Nadal is one such example of 2 ways arbitrage, but this was fictitious, so let’s look at a real live example involving 2 titans of the internet betting world, Pinnacle and Betfair Sportsbook.

Betfair offer odds of 1.8 (-125) on the total number of corners in the first half being fewer than 6 in the Premier League match between Liverpool and Burnley. For the same match, the odds offered by Pinnacle for there to be over 5.5 corners in the same half are 2.38 (+138). Placing both bets will mean that the market has been fully covered, either there will be over 5.5 corners, or under 6 corners. 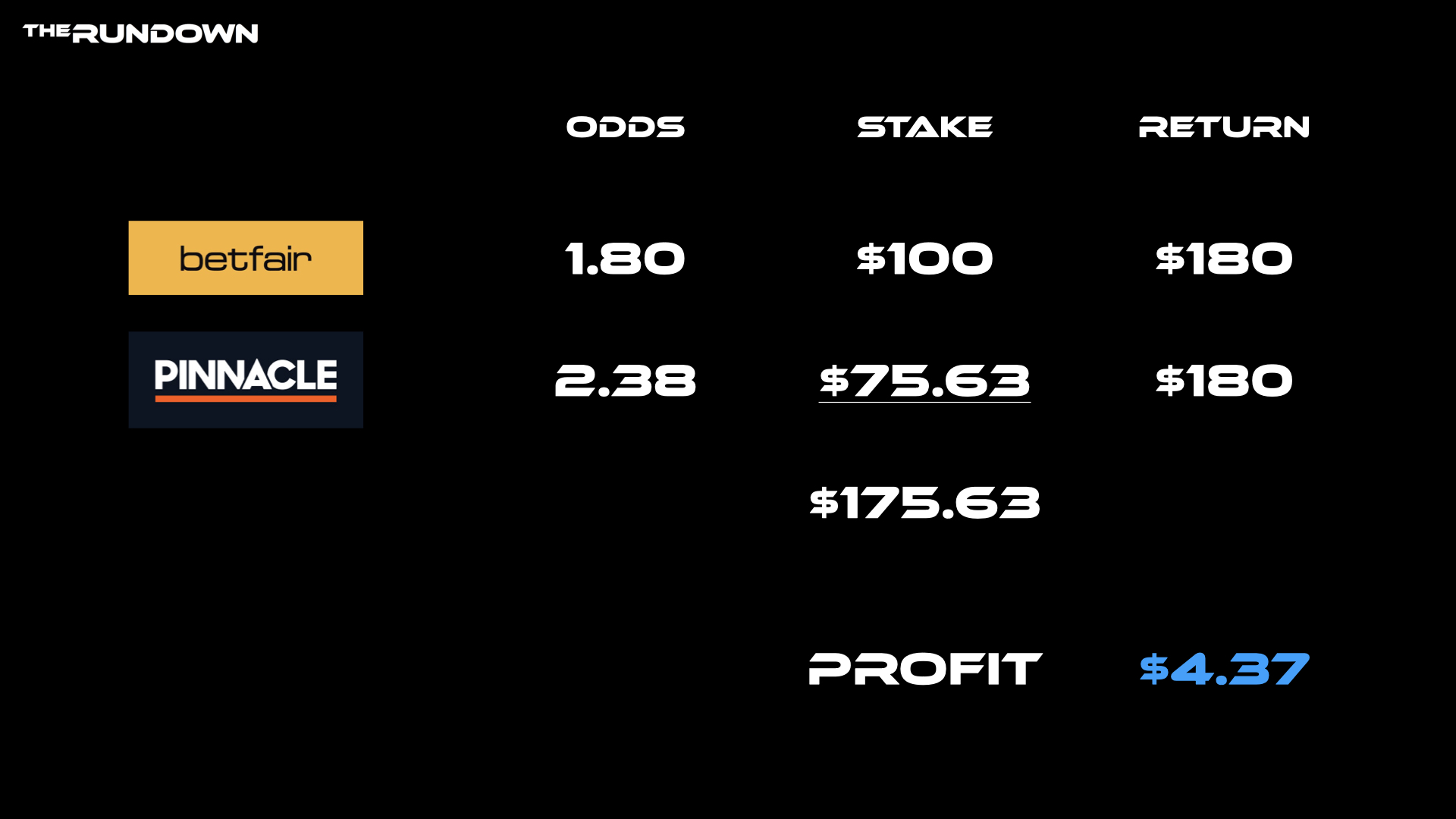 The theory is the same as with 2 way arbitrage, apart from the fact that there is an additional outcome to consider. For those betting on US sports this will rarely be an issue as draws lead to overtime which leads to an eventual winner, however in the rest of the world sports markets with 3 outcomes are more common, especially when betting on football.

Let’s look at the following soccer match between Birmingham and Coventry involving the bookmakers Skybet and Pinnacle..

Skybet offer odds of 2.90 for Birmingham to win and 3.30 for the draw, whilst Pinnacle have Coventry to win at odds of 3.01.

Running the numbers once again, a successful $100 bet on Birmingham will return me $290. In order to have an identical return if either of the other results occur, I will need to wager $90.63 on the draw at Skybet and $96.35 on Coventry to win at Pinnacle. 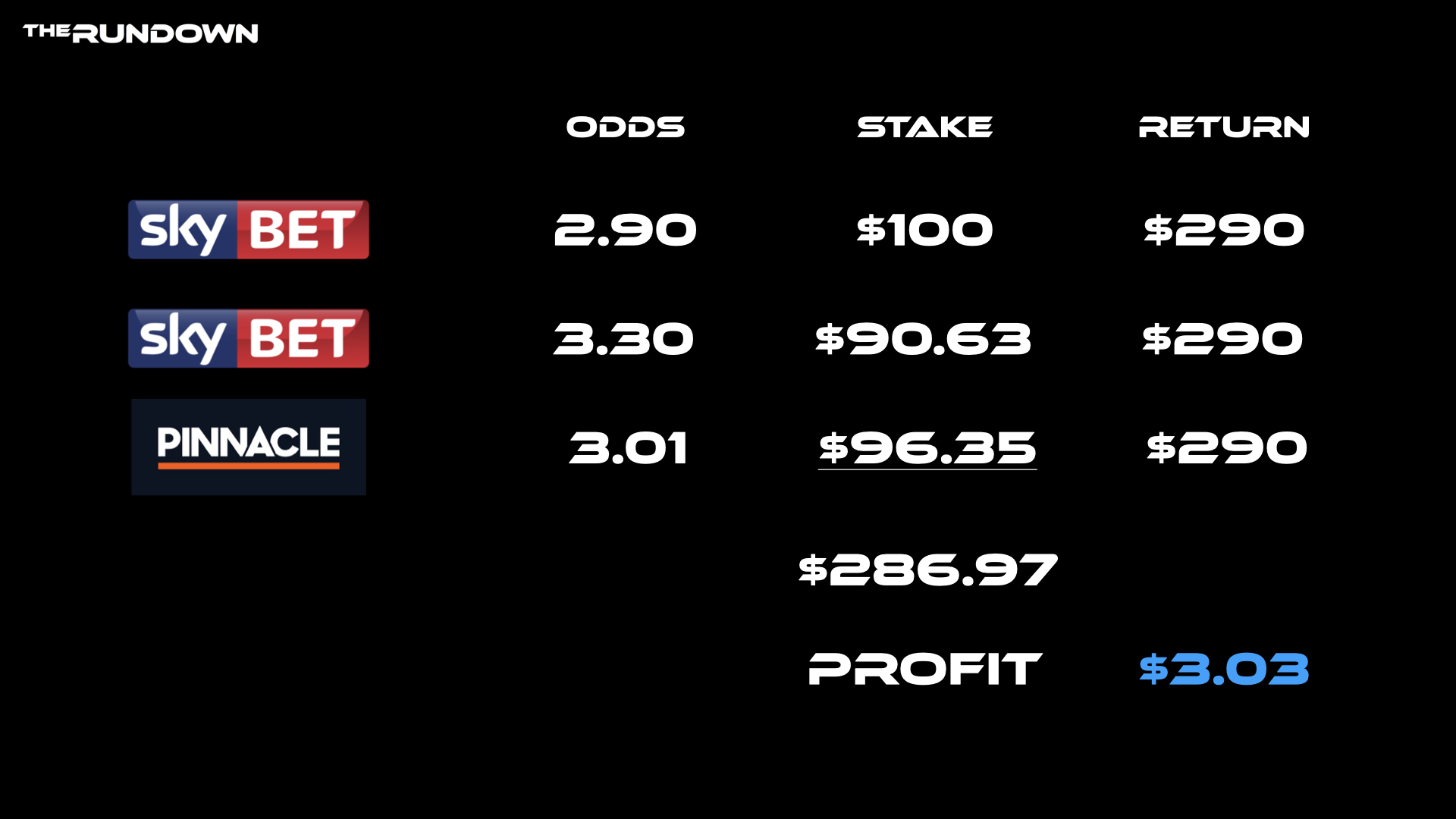 I hope that this article has been useful, feel free to comment below or send any emails my way either via our contact form or directly at [email protected]